The most misleading coaching advice towards stroke production – 1 – Service

(UPDATED) As there is not just one exact way how to correctly strike a tennis ball in order to win and as there are quite big overall margins in tennis, one can find quite some diversity in the ways how players hit their strokes. The best of the best are then (besides their personal idiosyncrasies) very similar in the crucial/decisive stroke reference points (often not being even exactly aware of them in detail), which are, unfortunately, mainly in regards of the follow through, also not exactly well known to many coaches and educators. As a result of this, many educational tennis publications, as well as coaching advice given to players, have often included and still include quite a few ill-conceived myths, which can be very misleading and cause significant limitations in the development of the players as well as lead to serious injuries. In general, players, coaches and observers of the game have often difficulties to understand the very significant difference between the active (crucial/decisive) stroke portion, which ends with “follow through 1”, and its passive (relaxation) portion starting with “follow through 2”, which can, unlike the active portion, have major differences from player to player. This misunderstanding leads to the situation that players are often being advised and programmed based on the reference points in the relaxation phase of the strokes (=follow through 2) and are thus often missing on the crucial/decisive reference points in the active stroke portion, mainly around and after the impact. This results in the unfortunate situation that many players are developing wrong images of the ideal strokes in their minds and are using these images as the underlying guidance for their stroke production. With this being done for years, often since their tennis beginnings, scores of players have this misleading guidance really hard-wired in their motoric programs and later changes are then very complicated.

One of the most misleading tennis instructions is the imperative suggestion to lead the racket after the impact across to the non-dominant leg (left with the right-handed player) in the follow through of the service motion. At the below-shown photos of Gael Monfils (*1986 / FRA), who belongs to very good servers, the key elements of the active portion of the stroke can be seen at frames #4 and #5 (follow through 1). It’s here where Gael fulfills the crucial reference points for a great service (Service 3.0 based on TENNIS 3.0 benchmark) while, as it seems, almost perfectly applying the TENNIS 3.0 CODE – mainly its crucial element, the biggest possible distance of the elbow from the core of the body. The frame #6 then shows the relaxation portion of the service motion (follow through 2). Should Gael focus and program his serving motion primarily in order to reach the finish shown at frame #6, he would be not able to reach perfection in the crucial active portion of the service motion as shown at #4 and #5. The relaxation portion of the service motion as shown at #6 happens naturally and can have quite a few varieties from player to player. Players who strongly focus at (while keeping the image of) coming/finishing across tend to have significant deficiencies in the pronation as well as with the optimal body energy integration/unloading into the stroke. The best servers, in contrary, focus at the optimal use of almost all the available energy in the action shown at #4 and #5 (long axis pronation with helix elements).

In a similar way, on the further below photo of my former client Sloane Stephens (*1993 / USA), who I have had the opportunity to help with her service and groundstrokes back in 2010 and 2011, the clear application of the TENNIS 3.0 CODE leading to the optimal body energy integration into the service is visible as well. Also, the winner of 22 Grand Slams, Steffi Graf (*1969 / GER) can be seen further below in an almost identical fashion. From these photos is clear that they both are focusing at the proper pronation on the dominant side (right for right-handed players) of the body with a well-timed full-body energy integration/unloading into the stroke. The entire available energy then needs to be spent to the highest possible degree on the dominant side of the body.

Last but not least, on the bottom can be seen a photo of a senior player Jörg (65+ / SUI) who started with tennis late and is still able to quite well fulfill the Service 3.0 requirements. 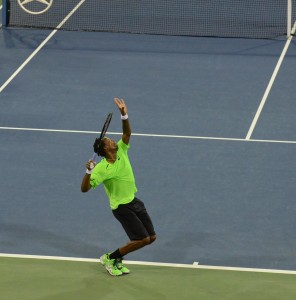 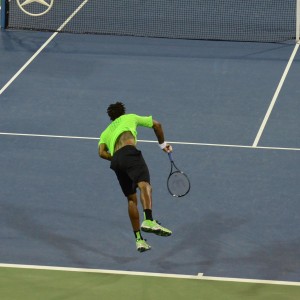 Gael Monfils (*86 / FRA) – 1st service 3.0 in the match – 5 of 6 – follow through 1 = targeted pronation with helix elements – the palm points for quite a long time to the outside, a big portion of the previously developed body energy was spent/unloaded already – KEY REFERENCE ELEMENTS – 2014 US.Open – New York / USA 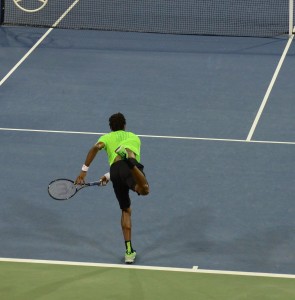 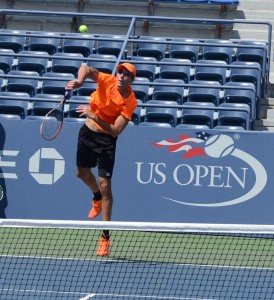 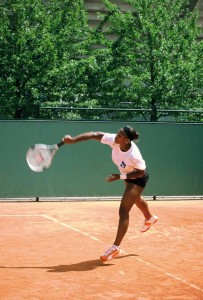 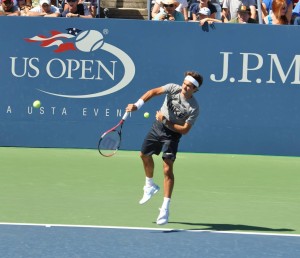 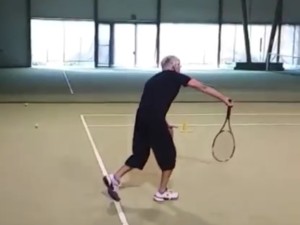 Tennis 3.0 Code has all the comprehensive information regarding the essential reference points leading towards the efficient Service 3.0 and other Tennis 3.o strokes.

This article covers just certain aspects of the tennis service technique. More detailed information about the efficient service technique and about the technique of the above-mentioned, as well as of the other dominant players of the past 20+ years, is available upon request at drmgb11(at)gmail.com.